With steep hills and Georgian architecture looking down into a green valley, Launceston is one of Australia's most picturesque regional cities.

At the heart of that valley is the kanamaluka/Tamar River which, for the past two years, has been the source of heated public debate.

Mudbanks have started to build up since the practice of silt raking was banned in 2019, changing the face of the river which is central to the look, feel and enjoyment of Launceston, Tasmania.

And just a few weeks ago, 15-year-old local school student Ashleigh Dettmer found herself stuck in the mud while competing in a rowing regatta.

"It was like really weird. Like, I wasn't expecting it to be so stinky. It was really stinky and squishy and weird," she said.

It took three boats to drag her waist deep out of the mud, and the rest of the races were cancelled.

It highlighted an issue many have argued - that the mud is unsightly, makes watersports difficult and threatens the future of rowing clubs, yacht clubs and a marina. A public campaign is demanding a solution.

But how much of a problem is the mud?

The Tamar isn't like a normal river. It's a tidal estuary which takes water from 15 per cent of Tasmania's land mass, acting as the final destination for sediments that flow down to it. It can't wash these heavy metals and toxins out to sea unless there's flooding rain, so instead it moves them back and forth with the tides.

That's where the mudbanks come in, compacting the sediment while wetlands filter them. Launceston sits right where those rivers meet the Tamar, an area that - pre-colonisation - contained expansive mudbanks. Throughout its history though, the city has wanted to use the river like other cities do. Huge dredging ships dug deeper channels for a port, while watersport clubs formed on the banks.

An entire suburb was built on top of vast mudflats and a major tributary was dammed.

When dredging became too costly, raking was employed in which the sediment would be dragged to deepen the river for various users.

Two years ago, an environmental report commissioned by the City of Launceston council found raking was causing great harm to ecosystems, was too costly, and was ineffective because the sediment would simply rest nearby and build up again in the same places. The practice was ultimately banned.

Raking and other methods had allowed clubs like the Tamar Rowing Club to operate since 1876, but since it stopped, the mud has built up quickly around its pontoon reducing the time when rowers can access the river.

It's the same story for the Tamar Yacht Club.

"Certainly there are the environmental aspects that have been mentioned, but I think that there needs to be an evaluation of what is reasonable with that. That is why I say I think that if there was a regular maintenance program, that may help in the volume of mud that needs to be removed at any one time," he said.

"It's vital for the users to be involved, and for us to come up with a resolution whether it be raking or dredging, and I think it comes down to those two issues, to ensure that the river can be utilised otherwise it will be a loss. "Not only to the clubs that are here, but in fact the tourists that come by."

Tourism has become a major consideration given that 20 years ago property developers transformed Launceston's old ports and silos into an expansive waterfront with cafes, bars, restaurants, upmarket hotels, apartments and a marina.

They overlook the upper Tamar, and as the mud builds up again, it has somewhat altered the view.

Errol Stewart was instrumental in that development, known as The Seaport, and he's unhappy with how the river is being managed. 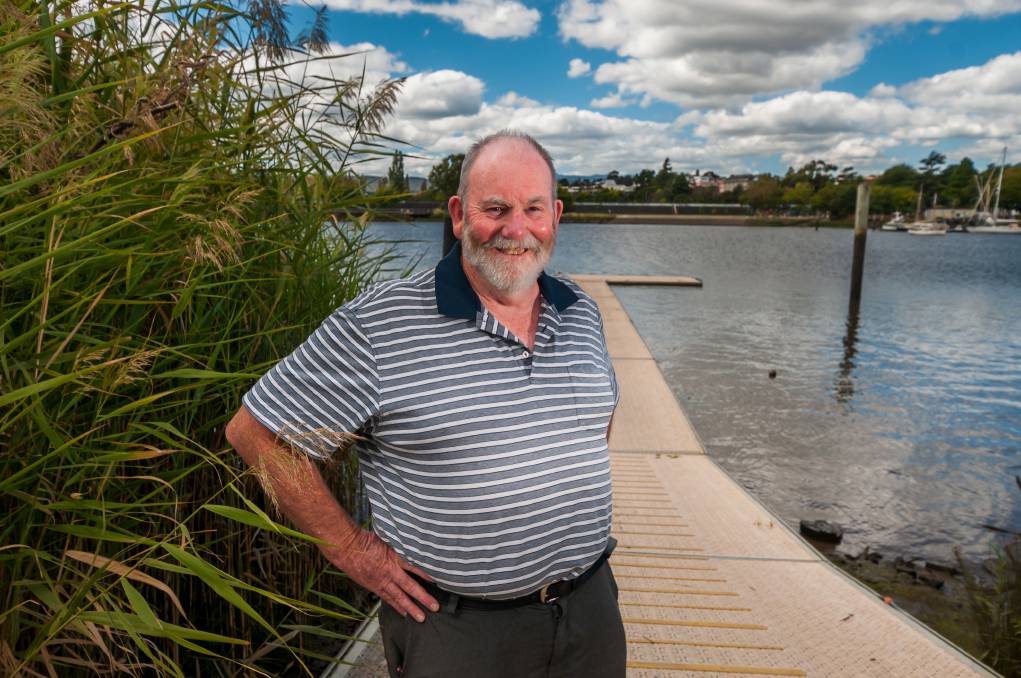 Tamar Rowing Club stalwart Jim Guy fears for the future if mudbanks are allowed to continue building up around the historic club's pontoon. Picture: Phillip Biggs

"I think everybody in the city has got a reasonable expectation that the river should be in better condition," he said.

"Some would say you've got to 'learn to love the mudflats', and I think that that's a reasonable statement, except the mudflats are fine but now what we're getting is banks of mud ... because we're restricting the flow via the implementation of the agricultural dams and because we've reduced the tidal prism over the last 100 years."

Mr Stewart has an obvious interest in keeping the river attractive and user-friendly, and doesn't want boats in the marina to become stuck in the mud. His solution to that problem is simple: build a boardwalk over the top of most of the marina, and relocate the boats further along the shore. "Fix the Mud" signs are a common sight in Launceston, particularly at the marina where boats can't exit at low tide. Picture: Phillip Biggs

"We think that's a really good compromise," he said.

Looking over the marina, there are dozens of placards with "Fix the Mud" on boats, in business windows and as bumper stickers in the car park.

But ecologists have a different view.

Natural sciences curator at the Queen Victoria Museum and Art Gallery, David Maynard, says the mud plays a crucial role in the ecosystem and the build-up is just nature finding its flow once again.

He points to an 1833 map of the upper Tamar at Launceston, where mud banks are clearly compacted around the banks with channels flowing through from the North and South Esk rivers. 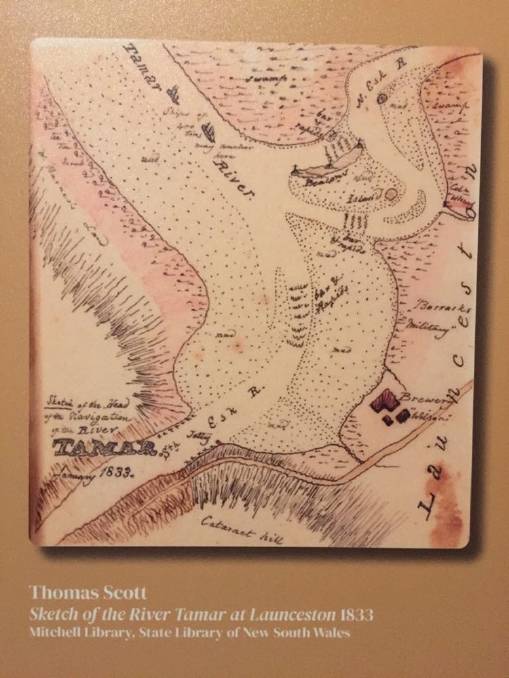 "What we're looking at is a perfect example of what nature would do if we didn't intervene," he said.

"You would have freshwater inputs from the North and South Esk rivers, and they'd deliver some of the sediments down into Launceston, those sediments drop out and form extensive mudbanks. This map in 1833 shows those very mudbanks.

"Whenever we do some management activity whether it be dredging or raking that removes those mudbanks, they return. As soon as you stop that activity, within 12 or 18 months, nature starts to put those features back again."

And given the decrease in water quality following raking, it could be difficult for the practice to be granted environmental approvals into the future.

As one City of Launceston council officer put it, residents might need to learn to "love the mud", a phrase that was repeated by some local politicians.

Mr Maynard said the mudbanks shouldn't be seen as an ugly blight, but an opportunity. 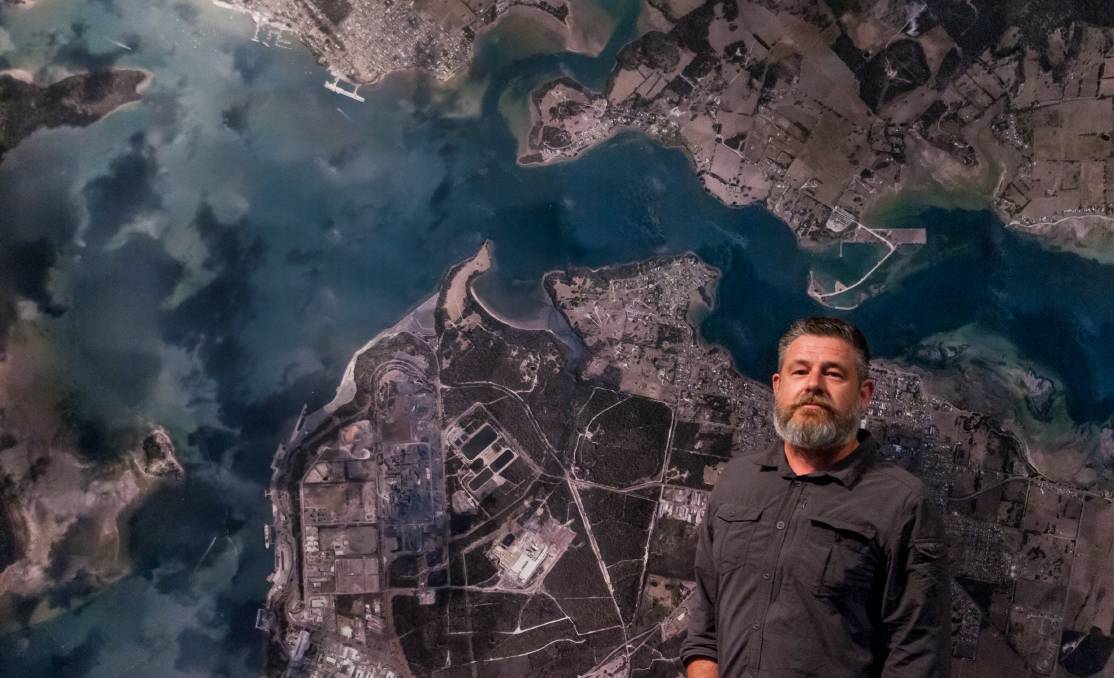 Natural sciences curator David Maynard wants the public to take a more holistic view of the Tamar estuary and get a better understanding of the role of the mud. Picture: Phillip Biggs

"The mud isn't broken, the mud doesn't need fixing, it's natural," he said.

"What we need to do is look at how we can live with that, how we might be able to change how we value it if we were to let it re-establish.

"If we would have improved wetlands, emergent forests of ti trees and such around, maybe we could encourage more residents to do more recreational activities around those wetlands and even use them to generate tourism income."

It creates a delicate balancing act for the city's decision-makers.

A report is expected soon from the Tamar Estuary Management Taskforce, made up of council, state government, river authorities and others, which would provide options for the future.

As a Northern Tasmanian who has spent much of his life with the Tamar within sight, Premier Peter Gutwein said the mudflats had "become a problem again" since raking ended but he understands the importance of water quality.

"I love the estuary, but I understand that there are challenges with the estuary," he said.

"One of the key things that we have to do is ensure we improve water quality."

Is it possible to find a balance between aesthetics, utility, safety, flood mitigation, toxicity and ecological impact, while ensuring the community can continue to love and value its river?

Maybe we'll all need to learn to "love the mud".

Listen to the full story on the latest episode of our podcast. Search Voice of Real Australia in Apple Podcasts, Spotify or wherever you listen.

This story The mud monster swallowing a city's river first appeared on The Examiner.