However, the MDBA evaluation conceded some communities have been left behind, suffering significant negative outcomes as a result of the Plan.

The evaluation took over a year to complete and was contributed to by recent reviews, communities, scientists and the Basin governments among others.

Murray Darling Basin Authority chief executive Phillip Glyde said a reform like the Basin Plan had not been attempted anywhere else in the world.

"It's absolutely outstanding to me that this change has been made, that 20 per cent of the water has been taken out of consumption for the environment, and we haven't had revolution in the streets," Mr Glyde said.

"This is such a big change...it's understandable that there's a lot of angst, you don't make a change of this scale without causing a lot of grief.

"This evaluation marks a crucial checkpoint in the roll out of the Basin Plan and clearly outlines where the achievements have been made, but also where more effort and action is needed."

Mr Glyde said the 2100 gigalitres of water now held and managed by the Basin's environmental water holders was unimaginable 20 to 25 years ago.

The recent drought saw large-scale fish kills and rivers dry up, but Mr Glyde said the environmental water had "cushioned the Basin environment."

"It's a little known fact that in three of the last six years it was only the environmental water which flowed over the barrages into the Cororong and out of the mouth of the river.

"That's a really strong indicator of the outcome of the Basin Plan." 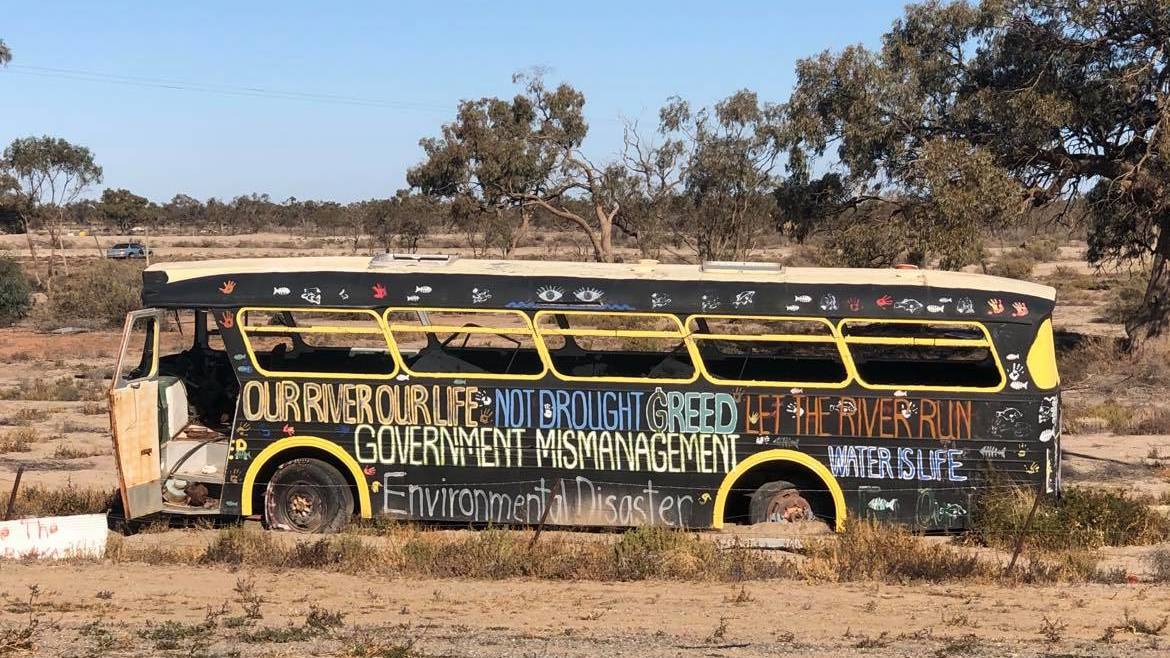 The evaluation found some small, regional communities had suffered significant negative impacts due to the Basin Plan and targeted support was needed. This bus was pictured in Menindee.

Impact of a changing climate

A central consideration of the report was the impact of climate change, with the Basin experiencing its driest three year period on record from 2017 to 2019.

As part of the evaluation the MDBA released seven possible future climate scenarios created by CSIRO.

The report said the more plausible scenario modeled a future where in 2050 to 2060 the Basin will be two degrees warmer and will receive 10 per cent less annual average rainfall compared to the historical record.

Currently it is planned that a dry year would occur one in 10 years, but under that scenario this will move to one in five years.

Mr Glyde said they saw the role of the MDBA was to improve information on the impact of climate change to the Basin and they are planning a water and climate resilience summit in March 2021.

However, he said it was unlikely changes could be made to the Plan to adapt to the changing climate until 2026, when the Plan is due to be updated.

"In order to get a change to the Basin Plan we have to get the change through the Commonwealth parliament which generally means most states and stakeholders will have to agree with those changes.

"We think the provision of information over the next few years will help inform that decision."

Mr Glyde admitted that the reform had been poorly explained to some communities and industry.

"That is part of our learning, there is so much more that we need to do to bring relevant information at a local level, to a particular community or industry," he said.

Executive Director of Basin Strategy and Knowledge at the MDBA, Vicki Woodburn said when the Basin Plan was agreed to, government's were aware of the adjustment it would drive and built in support.

"However, the evaluation had found the support hasn't been as effective as it could of been and more work is required to help people understand the changes, how they might play out in the future and what they can do to adapt and prosper," Ms Woodburn continued.

"Some towns are struggling while others are growing and thriving."

The evaluation recommended that basin government's provide more targeted support to communities suffering due to the Plan, that the MDBA improve water information and commit to working with Basin communities on water management to boost meaningful two way engagement.

The implementation of the Plan was also assessed, and although the NSW Water Resource Plans were a key outstanding element, it was the Sustainable Diversion Limit (SDL) Adjustment Mechanism projects which were of most concern.

NSW's long-overdue Water Resource Plans were handed in for accreditation earlier this year and Mr Glyde said despite some changes to the Plans necessary they were on track to be accredited.

However, six of the 36 SDL projects are at "significant" risk of not being completed by the 2024 deadline.

NSW Water Minister Melinda Pavey said they will not be able to complete the projects in their current form by the 2024 deadline, and along with Victoria recently called for a review of the Basin Plan to be provided by 2022.

However, this was knocked back by federal Water Minister Keith Pitt.

MDBA to learn from COVID-19

Ms Woodburn said the current approach to science and modelling information was also found to be inadequate.

"At some points during the evaluation we found we didn't have the modelling information we needed to understand what was happening in the system," she said.

"We need to bring this information into the public domain."

Ms Woodburn referenced how the COVID-19 data had been shared with the community, so everyone knew how things were tracking.

She said "the same should be true for how we manage the river systems."