A 29-year-old woman has been charged after a pedestrian was hit and several cars were rammed in an "extremely dangerous" incident in Newcastle CBD on Friday morning.

The incident occurred after the woman and a 55-year-old man, who were known to each other, met in the car park of KFC on Hunter Street, Newcastle, in NSW's Hunter region and an argument broke out.

The man then left in a yellow Holden Barina, and police allege the woman pursued him in a ute Ford ute and rammed the Barina multiple times along Honeysuckle Drive and King Street.

The alleged chase culminated on Hunter Street about 6.15am, where several people captured video of the Barina trying to turn around before the ute rams the car and strikes the male driver who had got out of the vehicle.

An ambulance arrives and the ute takes off towards Stewart Avenue. Several nearby workers approach the ute and urge the driver to get out after it becomes stuck in traffic at a red light. 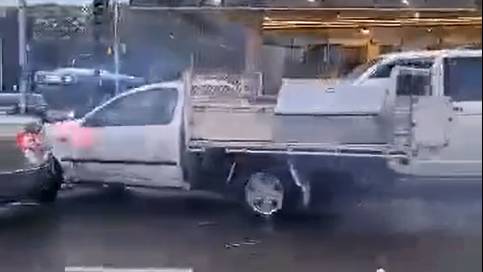 The ute pushed its way through several cars

But the ute pushes its way through cars stopped at the lights and takes off out into the intersection, where it collides with another car.

The car then flees down Stewart Avenue towards Merewether.

The 55-year-old male pedestrian sustained minor injuries to his arm and was taken to John Hunter Hospital for treatment. No one else was injured.

A short time later, the ute was found on King Street and was seized for forensic examination.

Following inquiries, police arrested a 29-year-old woman on King Street about 9.15am. She was taken to Newcastle Police Station and charged with use offensive weapon to prevent lawful detention, drive recklessly/furiously or speed/manner dangerous, not give particulars to other driver and possess prohibited drug.

Detective Superintendent Wayne Humphrey said vision of the incident "speaks for itself".

"The driving was an abomination, extremely dangerous, many lives at risk," he said.

"Despite the commentary on some of the videos we've seen, [which] some might find humerous, what I'm looking at is the potentiality for people to die in the main street of Newcastle.

"The potentiality for a fatality was quite evident.

"I'm just thankful no one was seriously injured."

Police are appealing to any witnesses who may have footage of the incident, particularly on Honeysuckle Drive or King Street.

"We're getting more and more footage in, it's amazing how many people have dashcams these days," Superintendent Humphrey said.