Yotam Ottolenghi is known worldwide for his eponymous food empire. The Israeli-born chef, restaurateur and food writer is loved and revered for his approach to food, at once adventurous, innovative and delicious.

He opened his first deli in London in 2002 and it quickly gained cult status; the brand now runs six delis and restaurants in London, including the acclaimed Nopi. He has also written several best-selling cookbooks, including Ottolenghi (2008), Plenty (2010) and Simple (2018).

The latest book is Flavour, the third in the Plenty series which celebrates vegetables.

He's long been a champion of them, but even he admits he sometimes has niggling doubts about how many more ways there are to roast a cauliflower or slice a tomato.

So where does he turn to for inspiration when faced by yet another tray of zucchinis?

In this instance, he turned to Ixta Belfrage, a 29-year-old chef in his test kitchen, a woman whose own food is deeply rooted in the cultures she's soaked up over the years. London-born, her mother is Brazilian, via Cuba and Mexico, and the family lived in Italy during her childhood. 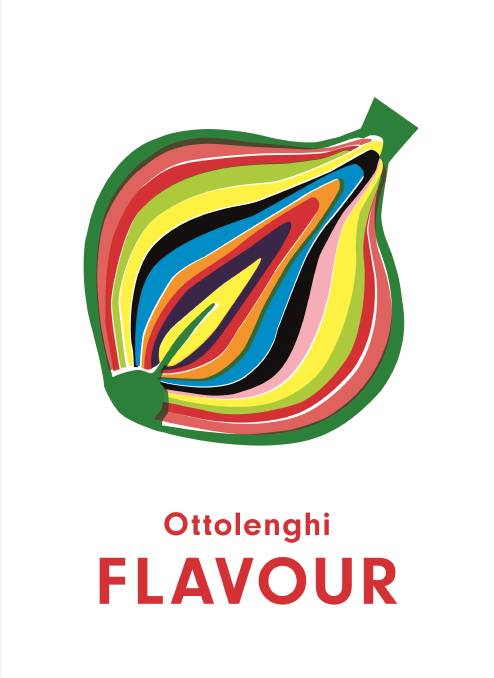 She's been touted as one of the most exciting prospects on the English food scene, with more than 64,000 followers on Instagram.

Even the man himself has said he learns something new from her everyday.

"I'm very humbled by that statement," Belfrage says from London.

"I mean, he's an incredibly intelligent and worldly person, and when he says that he's learned a lot about Mexican cooking and Brazilian cooking and ingredients, I think he probably already knew a lot of those things.

"But he does claim to have learned a lot about those kinds of ingredients. 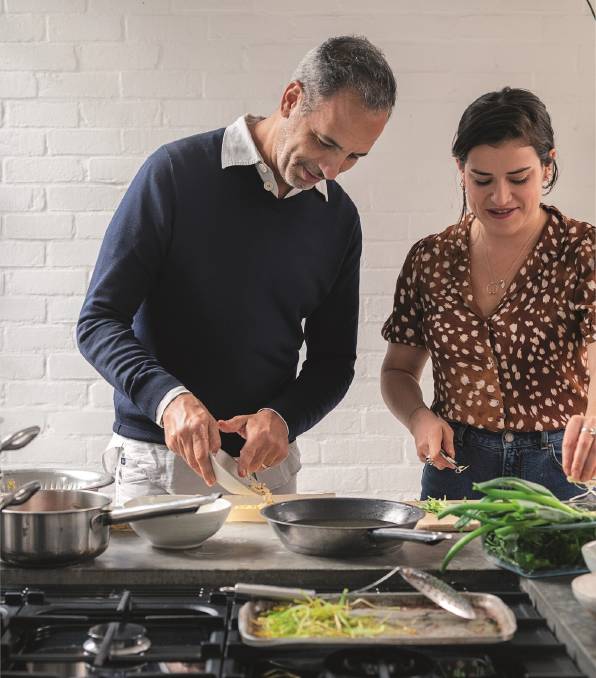 Yotam Ottolenghi and Ixta Belfrage learn from each other every day in the kitchen. Picture: Jonathon Lovekin

It must be every young chef's dream job to end up in an Ottolenghi kitchen, but Belfrage arrived with little experience. Her mid 20s were spent travelling, studying art and design; she even worked in Australia for three years selling power door to door. While she had always been obsessed by food, she never viewed it as a career option, and she chased the degree she thought would be essential to future success.

"I was about 24, I came home from Australia, I thought I'm not going to get anywhere without a degree, but I hated it and I just found that I was drowning my sorrows in cooking and in food, like I had always done all my life. Cooking has always come very naturally to me," she says.

"My sister knew I hated what I was doing and one day she just asked me, why the f--- aren't you a chef? And it was a bit of a lightbulb moment and everything fell in place."

Belfrage started a little catering business selling tacos from a market stall and applied for a job at Nopi. Less than a year later, she was in the test kitchen.

She remembers the first time she met Ottolenghi.

"I'd kind of met him a few times before I met him properly - when I was working at Nopi he'd come in every couple of weeks to taste dishes from the chef, but because I was just a commis chef I didn't really have any interaction with him.

"It wasn't until I started at the test kitchen, that I met him properly - he's such an incredibly patient, intelligent, wonderful man."

Belfrage says it's impossible not to learn something new every day from him as well.

"He's such a wonderful teacher," she says.

"It's funny, because I've been learning things from him before I ever knew him. I mean, we all have, I think the reason I combine flavours with such vigour is because of him, because of his books, growing up eating Ottolenghi food.

"Now I've been in the test kitchen for four years. He teaches us to take things through to the end, even if we think a recipe might not be particularly good at the beginning, he says to keep persevering and keep going until it's perfect. It might not end up being what you expected it to be but you can take it in all sorts of different directions." Soft zucchinis with harissa and lemon

Zucchinis aren't strictly speaking controversial, but they do tend to get a pretty lukewarm reaction from many, including, regrettably, two of our test kitchen colleagues. The reason for this is probably zuchinnis' high water content, which tends to make them, well, watery. There are plenty of ways to combat this - frying and grilling are two examples - but we actually use it to our advantage here, cooking the zucchinis slowly in their own juices, making them fantastically soft and enhancing their flavour by a long soak with fried garlic. (And in the process, we also managed to win over our two zucchini-iffy colleagues, we're happy to announce.) The zucchinis are very good hot, but are even better after 15 minutes or so, or even at room temperature, once the flavours have had a chance to get to know each other. Make them a day in advance, if you want to get ahead; just hold off on adding the basil until you're ready to serve.

1. Place a large, non-stick sauté pan on a medium-high heat with the oil and garlic. Gently fry for four minutes, stirring often, until soft, golden and aromatic. You don't want the garlic to become at all browned or crispy, so turn the heat down if necessary. Remove three tablespoons of oil, along with half the garlic, and transfer to a small bowl with the harissa, chilli, preserved lemon and lemon juice. Stir together and set aside.

2. Return the pan to a high heat and add the courgettes and 11/4 teaspoons of salt. Cook for 18 minutes, stirring often, until the zucchinis are very soft, but are still mostly holding their shape (you don't want the zucchinis to brown, so turn the heat down if necessary). Stir through half the basil and transfer to a platter. Spoon the harissa mixture over the zuchinis. Leave to sit for 15 minutes, then sprinkle with a pinch of salt and finish with the remaining basil.

Serves 4 as a side or mezze. We're not mad about calling vegetables a "steak" or "burger" or "schnitzel", because it feels like you are trying to pass them off as something else, something superior. Vegetables are great simply as they are. In fact, they are the best! Sometimes, though, using a meaty name helps you understand what's going on and how delicious it is. Our portobellos aren't trying to be a steak, they are simply as good as any steak (with mash), if not better. What gives the mushrooms their verve is the chillies and spices and all the flavoured oil that coats them. You'll make more oil than you need here; keep it refrigerated in a sealed container to spoon over grilled vegetables, noodles, meat or fish. Serve this with some sautéed greens, if you like.

4 tsp cumin seeds, roughly crushed in a pestle and mortar

1 tbsp coriander seeds, roughly crushed in a pestle and mortar

2. Put all the ingredients for the steaks and one tablespoon of flaked salt into a large ovenproof saucepan, for which you have a lid. Arrange the mushrooms so they are domed side up, then top with a piece of parchment paper, pushing it down to cover all the ingredients. Cover with the lid, then transfer to the oven for one hour. Turn the mushrooms over, replacing the paper and lid, and return to the oven for 20 minutes more, or until the mushrooms are very tender but not falling apart. Use a pair of tongs to transfer the mushrooms to a chopping board, then cut them in half and set aside.

3. Use a spoon to remove the onion, garlic and chilli (discarding the stem) - don't worry if you scoop up some of the spices and oil. Put them into the small bowl of a food processor and blitz until smooth. Return the blitzed onion mixture to the saucepan, along with the mushroom halves, and place on a medium-high heat. Cook for about five minutes, for all the flavours to come together.

4. While the mushrooms are cooking, make the mash by putting the beans into a food processor along with the lemon juice, olive oil, 1/2 teaspoon flaked salt and two tablespoons of water. Blitz until completely smooth. Transfer to a medium saucepan and cook on a medium-high heat for about three minutes, stirring, until warmed through.

5. To serve, divide the butter bean mash between four plates. Top with four mushroom halves per plate and spoon over a generous amount of the oil and its accompanying aromatics (you won't need all of it, though - see intro). This display of the season's best can double up as a light dessert or as a brunch centrepiece. You can make your own labneh but it requires draining the yoghurt for a good 24 hours, or you can make everything easily on the day using shop-bought labneh or some Greek-style yoghurt mixed with a little double cream. The berries you use are totally up to you, depending on what's good and not too expensive. You can use fewer types, or some frozen berries, if you like, especially for those which get blitzed in the recipe. You'll make more oil than you need; store it in a glass jar to drizzle over salads or lightly cooked vegetables.

900g sheep's yoghurt, or cow's yoghurt as an alternative

1 orange: finely shave the skin to get 6 strips

300g strawberries, hulled and halved lengthways (or quartered if they're larger)

1 lime: finely grate the zest to get 1 tsp, then juice to get 1 tbsp

1. Put the yoghurt and salt into a medium bowl and mix well to combine. Line a colander with a piece of muslin large enough to hang over the sides and place the colander over a bowl. Transfer the yoghurt to the muslin and fold over the sides to completely encase the yoghurt. Place a heavy weight over the muslin (a few tins or jars will do), and transfer to the fridge to drain for at least 24 hours (and up to 48).

2. Meanwhile, put the oil into a small saucepan, for which you have a lid, on a medium heat. Heat gently for about seven minutes, or until tiny air bubbles form. Remove from the heat, add the thyme and orange strips, then cover with a lid and leave to infuse, ideally overnight, though half an hour will also do the job.

3. The next day, put 50g of blackberries, 100g of raspberries and 100g of strawberries into the small bowl of a food processor along with the sugar and lime juice and blitz until completely smooth. Put all the remaining berries and the cherries into a large bowl along with the blitzed fruit and gently combine. You can serve it straight away or leave it in the fridge for a few hours, bringing it back to room temperature before serving.

4. Spread the labneh out on a large platter. Spoon over the berries, then sprinkle with the lime zest. Drizzle with two tablespoons of the infused oil, along with a couple of the orange strips and the extra picked thyme leaves.

This story Meet the woman who brings flavour to the Ottolenghi kitchen first appeared on The Canberra Times.